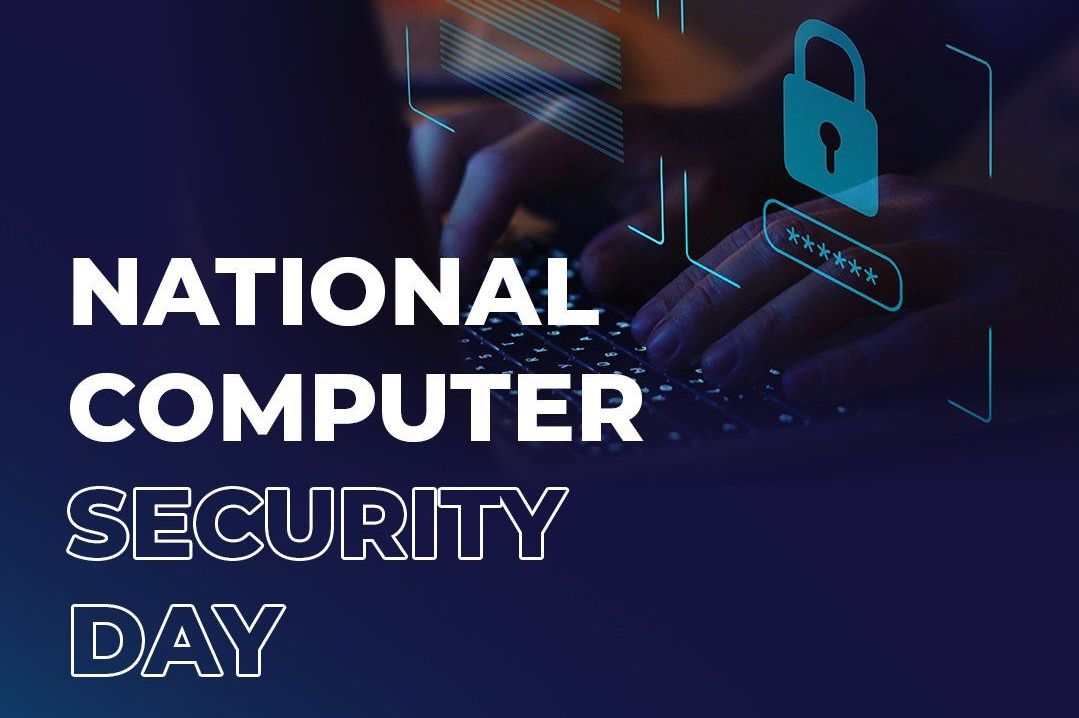 Take a moment and think about the device you’re reading this blog post on. When was the last time you updated your software, changed your account passwords or logged out of your email and social media profiles? Do you have login information saved to your browser and ignore those pesky alerts to restart your device? While many of us often roll our eyes when asked these questions, they are the very reason why National Computer Security Day is celebrated on November 30 every year by people around the world.

As long as computers have been around, the possibility of falling victim to a malicious attack has existed. Only a few years after the first IBM personal computer was released, researchers at Cornell University discovered the “Morris worm” in their computer systems. Within hours, this virus took hold of other university systems as well as their early version of the internet.

Later that month, a chapter of the Association for Computing Machinery’s Special Interest Group on Security, Audit, and Control created National Computer Security Day to raise awareness of the many threats computers are susceptible to. And in 2003, the U.S. Government hopped on the computer security train to launch the National Cyber Awareness System.

Despite the best efforts of the Computer Emergency Response Team and Department of Homeland Security, bad actors continued to do what they do best. In 2004, the MyDoom computer virus caused an estimated $38 billion in damage. The sophisticated attack targeted devices with Windows Operating Systems around the globe through an email designed to copy itself each time it was opened and then integrate with the system software.

Those who opened the email ended up with hijacked devices which were used to unleash a denial of service (DoS) attack against the organization the computer belonged to. More than 500,000 machines were infected in the first week of activity, making it the fastest and most costly computer virus in history. To this day, MyDoom is still an active threat, and in 2019 was responsible for 1% of all emails containing malware.

Since the MyDoom attack and Morris worm, computers have only grown in complexity, and the risks facing them have become more complex too. By 2025, cyber crime will cost the world an estimated $10.5 trillion; a staggering number causing businesses and individuals to place computer security at the forefront of their safety initiatives.

No amount of precaution, training, or preparedness is too much and while you may not be able to completely eliminate every threat, you can significantly decrease your level of risk by following these five key steps.

Enable Firewall Protection
Firewall protection is often your first line of defense against a potential attack. Similar to its namesake, a firewall’s purpose is to keep harmful risks out while protecting the valuable information stored behind the “wall” and monitoring all incoming and outgoing device activity. By installing this protective layer, you are equipping your device with the tool needed to prevent unauthorized web access to your email, websites, files, and other personal data. Although a firewall is a great first line of defense, it’s important to ensure it isn’t your only line of defense in the fight against cyber attacks.

Install Security Software
Your second line of defense will come from your security software which should consist of antivirus and malware protection. This additional protective layer will allow your systems and machine to be protected from damaging viruses, automatic spamming bots, network-targeting worms, illegal spyware, rootkits, and more. If a virus or malicious software makes its way to your device, the antivirus software will detect it and immediately work to remove it from your system. By acting as offense and defense for your device, you can have more peace of mind that your information is secure with security software in place.

Check Your Systems Regularly
As humans, we’re always told to make sure we’re getting regular health checkups and the same is true for your computers. When it comes to your computer, you’re the doctor performing the checkup and making sure everything is operating the way it should. While performing these checks, you should be looking for how fast your computer is running, how well your hardware is performing, whether antivirus updates are needed, and more. Each of these elements is critical to your computer’s overall health and safety and should be checked at least once each month.

Don’t Ignore Updates
If you identify that updates are needed while performing your system checks, you should always download them as soon as possible. As frustrating as those pop-ups and forced shutdowns can be, they are necessary to maintaining your computer’s security. These updates are designed to patch known security vulnerabilities, remove outdated features, and improve the performance of your machine. So the next time you hover your mouse over the “X” on the software update pop-up window, consider the importance of the data on your computer and the repercussions of your machine getting breached before clicking.

Stay Educated
New attack methods, and ways to protect your device against them, are created each day. The best way for you or your team to stay aware of the evolving threat landscape is to stay educated. For individuals, you can take online cyber security, networking, cloud, and data science courses to become more familiar with the way a computer works as well as proper defense methods. For businesses, you can enroll your team in cyber security awareness training and other continuing IT education to ensure computer safety remains a top priority. And for both, taking part in online communities and conversations is a great way to keep an eye on the latest trends and tactics.

Whether you’re just starting out or a well-tenured computer expert, maintaining security of your personal and business devices is crucial. We’re facing more risks than ever before and there is no better time to protect your computer than now. By following the steps above and remaining vigilant in the fight against cyber crime, you can avoid becoming a hacker's next victim.

To learn more about protecting your device or businesses, visit our website today.