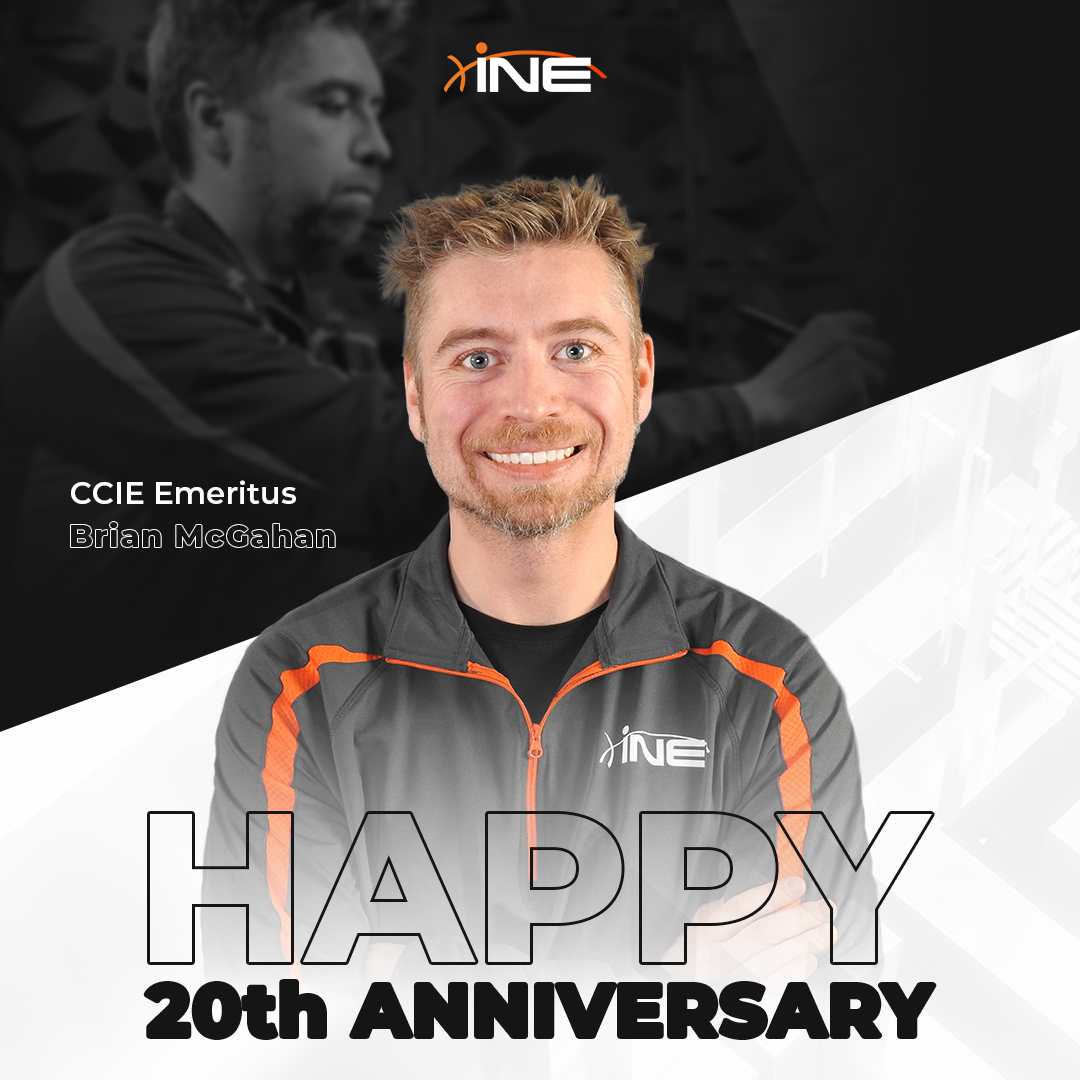 Fewer than one percent of networking professionals in the world achieve the Cisco Certified Internetwork Expert (CCIE) certification. So consider Brian McGahan, who has earned four of them, a bona fide genius in the field. Today, Brian marks the 20th anniversary of passing the CCIE Routing and Switching Exam, and in doing so, earns the rarified status of CCIE Lifetime Emeritus tenure.

“I literally cried tears of joy when I got that first email that said ‘Congratulations on passing the CCIE Lab Exam,’” Brian recalls with a smile. He’s had plenty to smile about since.

Brian McGahan’s journey began as a teenager growing up in south suburban Chicago, studying Computer Science with little enthusiasm and working in desktop support. After stumbling on a local magazine ad offering $120,000 salaries for CCIE certified applicants, McGahan quickly shifted gears. “At the time I had never even heard of CCIE, but after a little research, I was hooked,” he says.

Brian set his eyes on becoming the youngest CCIE in the world, dropping out of university, and throwing himself into studies at a local community college. At the age of 20, he achieved this goal, locking in his first CCIE as #8953 in January of 2002.

“I took my dad with me to the exam site in North Carolina, not for moral support, but because I was too young to rent a car at the time,” Brian remembers.

Although the CCIE is the pinnacle of many networking careers, for Brian McGahan, it was only the beginning. Over the next decade, he would earn CCIEs in Service Provider (2006), Security (2007), and Data Center (2013), along with his CCDE (2013).

While achieving these milestones, Brian co-founded INE, quickly growing it into a global leader in the rigorous landscape of self-paced and instructor-led CCIE training. As an instructor, guide, and mentor, Brian has helped thousands of students achieve their own networking goals through an extraordinary ability to break down the most challenging topics into bite-sized nuggets of information.

The CCIE is Cisco’s most prestigious certification, notorious for its rigorous combination of written qualification exams and eight-hour hands-on labs. It requires a deep understanding of networking technologies and typically requires several years of industry experience. As a CCIE Lifetime Emeritus, Brian is recognized for his technical proficiency and long-term status within the program and is permitted to participate in discussion forums, blogs, groups, etc., as an Emeritus. In addition, his CCIE number is maintained and is now classified as Emeritus status.

Brian has been with INE for 18 years and is currently the Director of Networking Content.


“Brian McGahan is in a class of his own,” says INE’s CEO Richard McLain. “His knowledge, expertise, and ability to transfer that knowledge to students is incomparable. I can’t remember a time when Brian didn’t drop everything to help a student solve a problem or figure out a solution. It is a privilege to work with him each day.”

INE Live will host a special stream Friday, January 7 at 1:00pm EST featuring a conversation with Brian McGahan. He’ll share his journey, lessons learned, and advice for others in the live stream, which will be shared on INE Live, as well as LinkedIn, Facebook, Twitch, Twitter, and YouTube.

INE is the premier provider of online technical training for the IT industry. Harnessing the world's most powerful hands-on lab platform, cutting-edge technology, global video distribution network, and world-class expert instructors, INE is the top training choice for Fortune 500 companies worldwide, and for IT professionals looking to advance their careers. INE’s suite of learning paths offer an incomparable depth of expertise across cyber security, cloud, networking, and data science. INE is committed to delivering the most advanced technical training on the planet, while also lowering the barriers worldwide for those looking to enter and excel in an IT career.